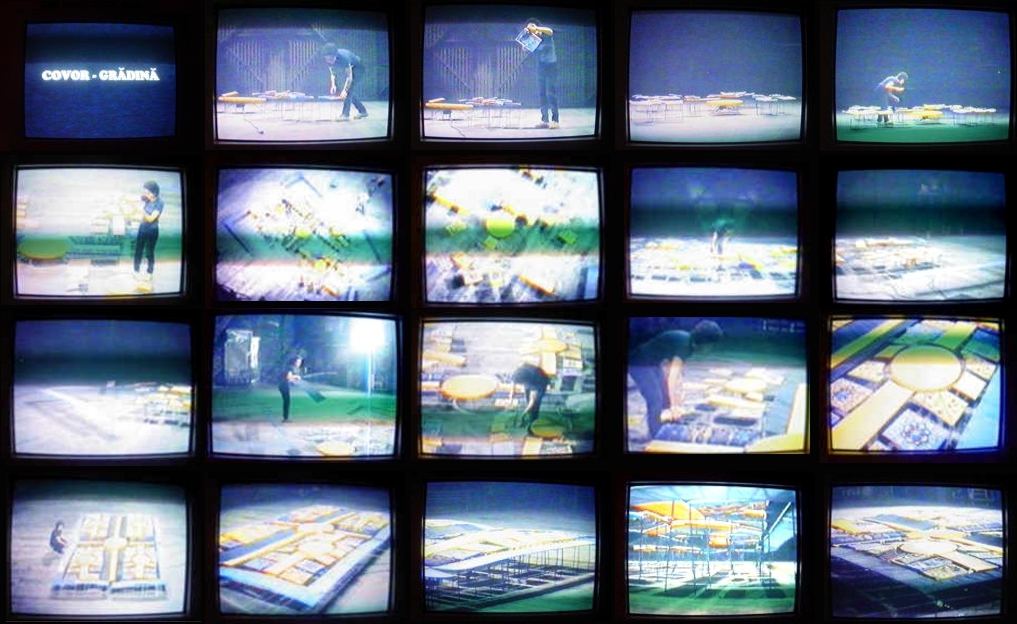 I’m an artist, scholar and curator interested in the relationship between art and technoscience, with a special focus on smart textiles and wearable technologies.

I’m a member of the 2580 Association (Cluj, Romania) and of Paidia Institute (Cologne, Germany). Following Visual Arts and Cultural Anthropology studies in Cluj (Romania), I completed my PhD thesis at Paris 1 University (France).

It was my diploma work in Textiles Arts and Design at the University of Arts and Design Cluj, Romania. I was interested in performance and the performative character of textiles. Therefore for my diploma I wanted to make a flying-carpet, or at least something to give the illusion of a flying carpet. But back in 1998 Romania there were no micro-electronics shops. I ended up building a 12m° installation with 5 turning elements build with old Dacia cars’ wind-screen motors.

It was my diploma work in Textiles Arts and Design at the University of Arts and Design Cluj, Romania. Later on, it was exhibited during the Bucharest Tapestry Triennial in 1999. Following this exhibition, I was invited to exhibited in an art centre near Bucharest in what would have been my first personal exhibition.

During my studies I was interested in textile sculpture and installations. The idea of a “flying carpet” came step by step. Carpet – Garden is a modular work integrating mobile elements which were programmed to turn in the rhythm of music

Since the object of tapestry is generally a carpet and since the classical Middle East carpets generally deals with variations of idealized gardens representing the Paradise, the idea of working on the subject for my diploma was a very appealing one. But more then that I was tempted by the idea of a moving carpet, a flying one.

The project failed twice, if I am allowed to say so.
There was first a technical failure. My first plans about how to build this carpet were put down by the engineer I was asking the help.
Secondly, the work I left in the custody of the art centre was destroyed. Following the elections, the director of the centre changed. The new director didn’t wanted to exhibit my work anymore and she didn’t wanted to pay the send back of the work. When I came back to take my work, it was half destroyed.

There is a film of the installation which is now on-line. Otherwise, I cut detached the weaved parts and recreated a new installation.

The work was destroyed in the end. But I learned a lot about bricolage and electronics in the process. I also learned I have to make more easy to transport and to install works. It was my first e-textiles work with to so small electronic components.

The new kind of performativity they allow. It is also the multilayered relationship to materiality, craft, labor, aesthetics.

Most of the discursive aspects are related to the types of application they allow (army, health, aesthetics, etc.) or their capacity to allow  new applied way of teaching science.

I there it will be more and more interest in the material science research, but also there will be need it a much more systemic approach to design, one that takes into consideration the conception, the production, the use and the residues of the e-textiles, the labor…. Legal and social aspects are therefore not to be left aside.