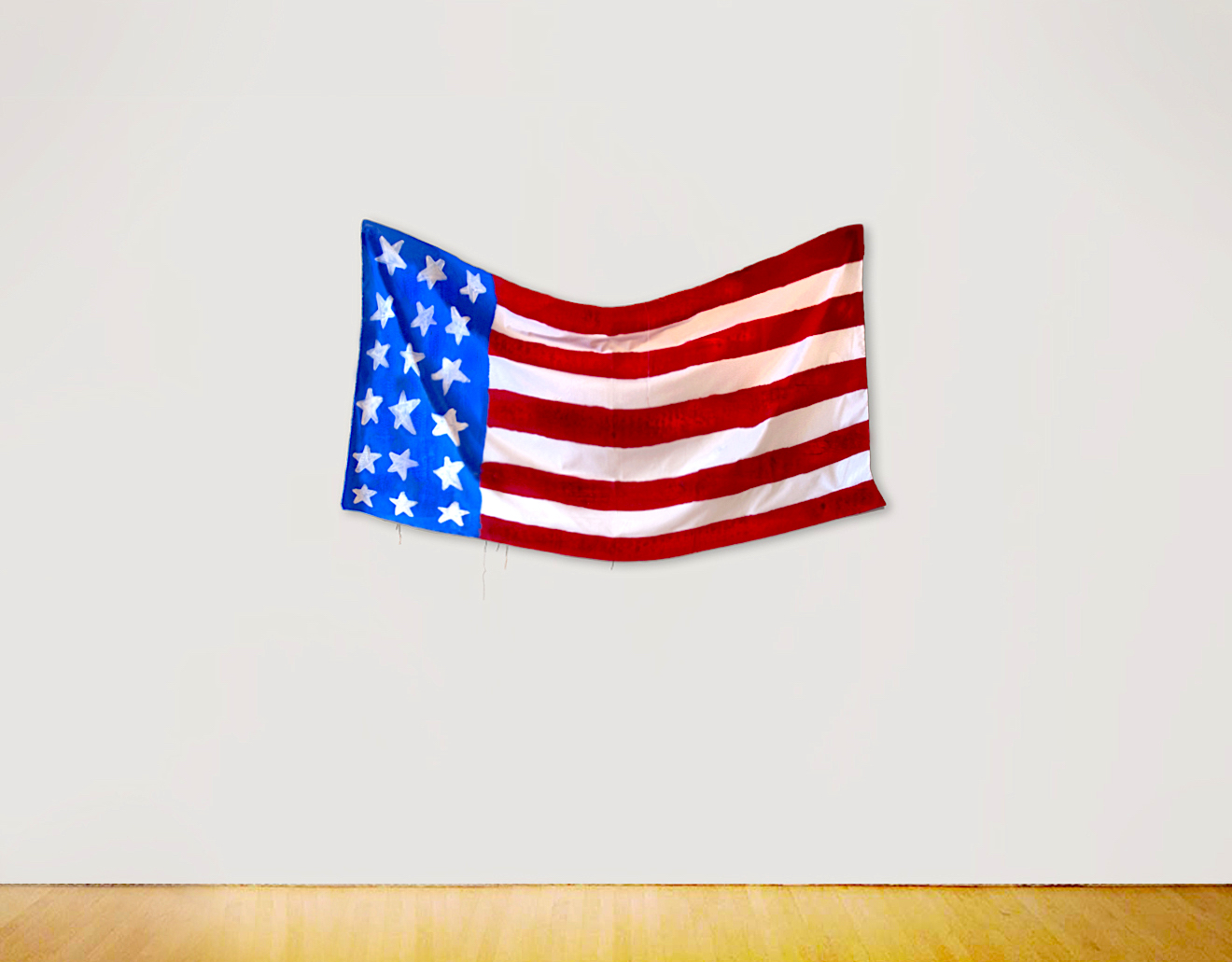 Since I was a child I had the insane need to understand how things worked trying to understand the mechanisms that regulate them, breaking them up to the point of no return. Needless to say my parents weren’t always happy with this curiosity. Today my work explores the system of language, its strategies, its grammar and its elements, with particular reference to contemporary technologies.

Describe the context (art/design/academia/other) of your project
“USA burning flags” consists (for now) in a hand-made flag on cloth. However, this is an art installation, as the flag is exposed as an object taken from its historical and geographical context. “USA burning flags” is a work in progress. To date, the work consists of a single flag and a series of contacts with various associations and people in different countries especially in Middle East area (but not only).

Was there a specific framework for your project? Was it aimed to a specific call, exhibition or other defined frame? If yes, what kind?
“USA burning flags” is a personal project. This flag, in particular, was made in Pakistan to be burned during a protest, and it’s the result of almost 2 years of work and difficult negotiations that has involved public and private, local and international institutions and private citizens.

What was the motivation for your project?
The project is linked to the events that in recent years are affecting the Mediterranean and Middle East countries. Events that bring with them and describes the brutality of some political/economic decisions and the logic of power/profit that regulate it.

Give a short description of your project
Many of the handmade USA flags made to be burnt during protests have errors that completely distort the organization of the flag. The error, in this case, represents a series of failures and brings into play the whole collective imagination around this symbol. Gesture, that of giving the flames, nowadays even more valuable, in a historic moment in which the worldwide identity seems to be redefined day by day, leaving room for uncertainty. This flag is made in Pakistan.

How did the project fail?
technical failure

Describe how you failed, the reason you think you failed, what you have learned and what you would do differently from today’s perspective.
Personally, it is a failure because in almost 2 years of work I have just received a flag. However, the errors in making those flags can be read as a success, such as the ability to show a series of misunderstandings and failures.

What was the afterlife of the project?
The idea of the project was, and still is, to create a collection of flags from different parts of the world.

How did the failure affect your work and your progress?
Failure, in this case, becomes part of the job. Failure, that tells a number of difficulties that perhaps, better than the flag itself, show the difficulties around this issue.

What make e-textiles an interesting subject that matters to you?
In this case, it is not an e-textiles, however this fabric/flag is interesting to me because it tells also about the difficulty in accessing a number of technological structures in certain countries (i.e. control the design of the flag during its construction).

What make e-textiles interesting to the world as such?
The possibility of incorporating technology, not a body extension (e.g. phone, watch, …), but part of the body itself.

Which aspects should be given more importance in the future developments of e-textiles products and services?
Perhaps one of the most important functions of the e-textiles is the ability to monitor vital functions, however the ability to continuously program and update these textiles device makes them particularly versatile and interesting.